Sondheim and an Angel Brighten up my New Year, Twice 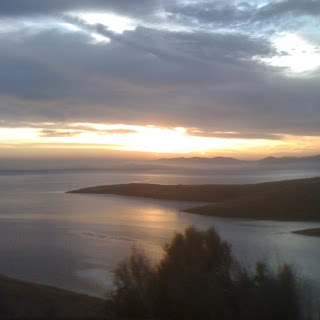 Last night I had to make an unexpected drive back to the Monterey area beach house on the final day of vacation after having returned home earlier in the day then finding that some very important items were left behind and unattended to before our departure with no means to address them remotely. I was driving along and brooding about my misfortune on having to retrace a 2-1/2 hour trip at 8pm and then return to Stockton again this morning in time for work after two weeks out of the office. In fact this was the 2nd year in a row with an inauspicious start after last year waking up on New Year's day to find a nail in my tire and none of the normal tire shops open on the holiday when I had to return home later that day. The nail was in a spot that could not just be patched and I had some challenging tires to replace and too long a drive home on the space saver spare. Fortunately, good providence returned when I found Angel's Tire Service in nearby Castroville just happened to be open that morning and have a single used tire that would fit the bill.

So picture my mood last night, alone on the road thinking, "Here we go again, what a lousy start to the New Year!", kicking myself for failing to button up all the details before leaving the beach earlier in the day, half-resenting my wife who's comfortable at home despite offering to accompany me. In an effort to change this dark disposition I turned on Sirius radio looking for some Jazz and was surprised to find a rebroadcast of NPR's Piano Jazz with Marian McPartland from 1994 featuring an hour long session interviewing and playing with Stephen Sondheim. I had only missed the first 10 minutes or so. As I am also a fan of musical theater (performing some show tunes now and then as part of a chorus) and of Sondheim's work, (not just because he's a great fan of the Blackwing pencil), I couldn't help thinking about Angel's tire and that perhaps good providence was returning again to salvage my first day of the year once again.

This is a great listen. There is some great discussion between Stephen and Marian in this segment and with her playing some of his tunes on piano with her own interpretations and Stephen commenting back about those as well as his own thoughts and stories about composing those songs. One of my favorite parts is when she plays "Send in the Clowns" and he talks about both the Sinatra version, re-scored by Nelson Riddle (another Blackwing pencil user) and trying to get Nelson to change something he didn't like and then alternatively willingly making a change for Barbara Streisand request on another change in the same tune as he agreed with the reason for the change. This segment starts about 22 minutes into the session, though the whole show is a highly recommended listen and very enjoyable.

I forgot fully about my false start to the year and even had a lovely drive back this morning witnessing a gorgeous sunrise coming up over the fog rolling out of the central valley and covering the lower reaches of the San Luis Reservoir as I drove down the pass. I just had to stop and take the photo here along the way. Then I return to the office this morning and find an e-mail from Justin over at Obercreative that had come in over the holiday with a scan of a page from Sondheim's new book "Look, I Made a Hat". In it Sondheim mentions "In Finishing the Hat I sang a paean of praise to the Blackwing pencil" and then goes on to mention. The timing really couldn't be any better. What a great start to the New Year. Going to have to order this ASAP.

So thanks Stephen and thanks to Angel for brightening up my false starts these past two New Years. And to any of you who'd had a somewhat slow beginning to the new year I hope this story has been at least a little "enlightening". Happy New Year and here's to having a great and very creative 2012. 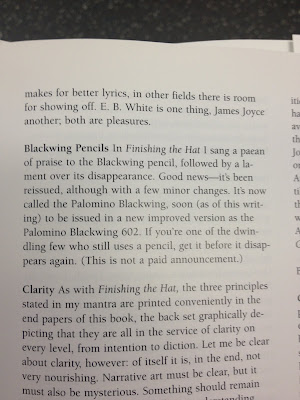 Posted by WoodChuck at 10:54 AM No comments: