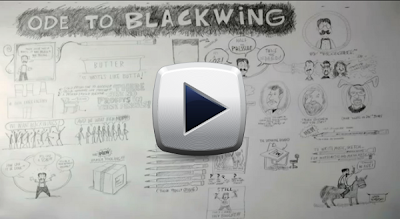 
Today marks the 1 year anniversary of the introduction of our Palomino Blackwing 602 pencil for sales on Pencils.com.  It's been a fun first year with alot of positive developments, including most recently our original Palomino Blackwing pencil being featured in an upcomming movie.  But today is really about poetry.

Yesterday was also the first anniversary of my original post "Ode to Blackwing", my rather hokey attempt at a poetic tribute to the history and revival of the Blackwing pencil and the process of responding to customer feedback to create the later Palomino Blackwing 602 version as we introduced it.  Today we have just released the Animated version of "Ode to Blackwing".  This video was produced as suprise to me for the Blackwing Experience event in New York back in April.  It was playing on an animated loop at the end of the historical timeline on the pencil industry. A few lines were modified by our creative team from my original version and the voice of course is not mine.  Thanks to Cartoonist Gary Kopervas for collaboration on this project.  Hope you enjoy.

As we are celebrating Literature and Poetry as our theme on the Studio602 blog this month and yesterday we launched our Pencils.com Poetry Slam contest I thought I'd share this video for a bit of inspiration.  Hope you'll enter by June 19th for a chance to win a great giftset.

Posted by WoodChuck at 3:12 PM No comments: Links to this post