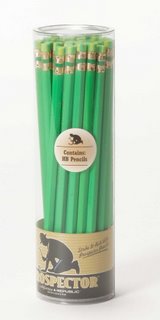 The very industrious Kyle MacDonald started with one red paperclip on July 12, 2005 in his quest to trade his way up to a new house. After just 10 trades and 9 months time he has bartered his way up to one year's free rent for a 700 square foot house in Phoenix, AZ and is now looking for the next trade to reach towards his ultimate goal.

Quite an adventure in value added activity despite the added costs and time he's expended in travel expenses and locating trades that move him along his path. I guess there's no real PayPal equivalent in the trading community to build some trust that would reduce such transaction costs. Certainly Craigslist and similar sites offer a means of reducing the search costs, but they mainly work within local markets where individuals are able to go and see for themselves what their getting in exchange for their item. Bartering of course is a very old system of trade, predating monetary exchange. In fact, it was the inconvenineces of the barter system in part that lead to the development of money.

So does a bartering system for pencils and office supplies make sense today? Some consumer products manufactureres do trade obsolete inventories for things like advertising trade credits. But these are intercorporate trades and the strings attached to sue the trade credits generally reduce their value. Would consumers willinging and actively trade office supplies in a barter relationship if an efficient and trustworthy transaction system existed? How easy might it be in such a system to trade up from a pencil to a PDA through a series of trades? Would it be worth the effort?

Clearly Kyle benefits from the novelty of his quest, the increasing publicity and the fact that his trade partners are assigning value to the emotional benefit of participation in Kyle's adventure to be willing to trade something of higher value for the lesser value item Kyle is offering. Otherwise who could justify a trade of a red paper clip for a novelty fish pen of all things. In an office supply bartering system with efficient transaction costs as usage increases such a system would reduce the value added increase one might get from such trades since there would be more selection of like value available. Thus it seems the main benefit would be a better use and distribution of the excess inventories people may be holding. Certainly, eBay has provided a rather efficient outlet for alot of the old junk accumulating in peoples garages and drawers and has made strides in redistributing such excess inventories. However, eBay is designed around monetary exchange for these goods and is not a barter system.

So what will you trade me for a tube of Prospector Pencils?
Posted by WoodChuck at 3:40 PM

I have bought many office products with good discounts from office depot store at CouponAlbum.com...And they all are of fine quality..