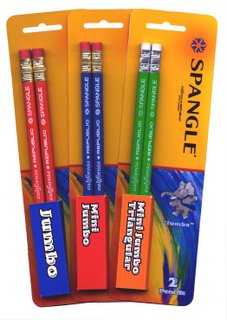 Well it's amazing how fast the past couple of months went by and how busy we've been here at CalCedar multitasking on an ever expanding list of activities. In that time I've failed to keep Timberlines readers up to date. So here's a quick summary of the main highlights and some of our comming attractions.

Our Pencil World Creativity Store on eBay experienced our biggest month of sales ever in July as a result of the Boing Boing post highlighting Ninth Waves Design's road test naming the Palomino pencil replacing the Blackwing 602. The post didn't even mention our store site, but many of you thankfully searched us out and we experienced two times the single largest prior month sales.

A key challenge responding to all this was that this development coincided with an important transition here in our offices. My assistant Jeanette had just decided to depart the company to pursue other interests. Fortunately one of our former employees Paula was available rejoin the company and is now handling customer service on our eCommerce ForestChoice and Pencil World sites in addition to taking on Jeanette's other duties. Fortunately, with some part time support from Jeanette through this transition we were able Paula was able get up to speed and continues to maintain our commitment to 100% positive feedback.

We're also currently in the midst of additional transitions here in our offices. After 18 years in our corporate headquarters buliding we'll be relocating at the end of the month back into CalCedar's original offices next to the old slat factory here in Stockton. Returning to our roots in a manner of speaking. Going through years of files and reducing everything to fit our downsized offices after moving operations off shore in the past few years is quite an effort. One benefit is that we're turning up some interesting things for future Vintage and Collectables auctions. Stay tuned.

A few significantly anniversaries of note were missed in the past few months that I'd like to mention.

July 20th - 1st Anniversary of Pencil Revolutions Blog - Like me conrad John has slowed down a bit with new posts. I know he moved this summer, but hope we haven't seen the last of his interesting pencil ephemera.

August 5th - 1st Anniversary of Timberlines Blog. A bit slow lately, but I do plan to continue my series of posts on industry issues to keep things interesting, not just promotional posts on our products.

September 16th - 1st Anniversary of launch of the Palomino on our Pencil World Creativity Store. Thanks to a inaugural review at Pencil Revolutions the Palominos were out to were let loose from the corral. Now a year later we're thankful to have a small but growing group of faithful riders and we're focused on expanding the number of stables housing Palominos through building our retail presence.

Unfortunately I missed being able to celebrate another milestone with my wife, my own wedding anniversary, during my August trip to Asia to visit our factories. During this trip we worked on finalizing some new items for the California Republic product line which will be making their debut in the comming months. The photo in this post shows a few of our new Spangle Jumbo learning pencil items for primary school students.

We have several new eBay listings & additional items in the works. We've just relisted our Spangle Halloween pencils at special pricing for the holidays and have coupled them also with a special promotion on our Palomino Wooden Box Color and Graphite pencil sets. Comming along soon we'll have trial listing on some bulk packed 36 and 72 count Palomino's on our Pencil World Store. Later in the year some special items for the holidays and as mentioned earlier our office move has turned up a whole range of items for a new series of Vintage & Collectable Pencil eBay Auctions.

I'll do my best to keep you posted on new developments for the company as well as some further industry related posts I'd like to get t0.
Posted by WoodChuck at 7:19 PM

Welcome back....
The Jumbos sound great. Ah, think of a Jumbo Palomino? A Clydesdale?.....

"Comming along soon we'll have trial listing on some bulk packed 36 and 72 count Palomino's on our Pencil World Store."

Did I blink and miss it?

Palominos ate wonderful. A gross of the ones with erasers... what a lovely thought.

Oops, make that... Palominos ARE wonderful, not ATE wonderful. Sorry.

Jim - You didn't miss the bulk packed offer. We just have been busy with other matters. I took a photo for the listing this weekend and well try to get it up in the next few days once we get a proper count of what we have in these pack sizes.