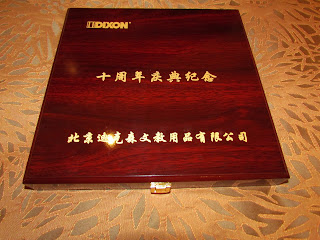 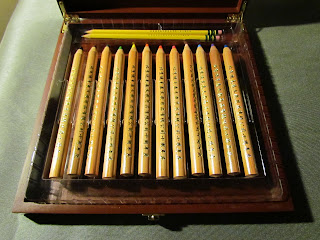 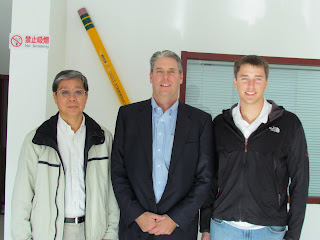 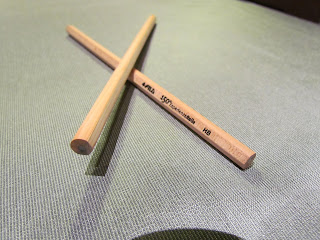 Overall I was impressed with the ongoing development of this facility which plays an important role in the total pencil manufacturing strategy of FILA Group's global operations and has contined to expand capabilities each year over it's ten year history. It was a great initial exposure to pencil manufacturing for Philip. Congratulations to Tommy Lin and his entire team for 10 years of growing accomplishments.
Posted by WoodChuck at 1:29 AM

Sadly, and in my opinion, the quality of Dixon pencils has declined steadily since production in the USA stopped in favor of production in China. I one wrote to Dixon about this, not seeking satisfaction, but simply venting, and guess what? They sent me a box of Chinese Ticonderogas as a consolation. They sharpened poorly, the graphite core was off center, and every one has therefore broken cores during sharpening and/or during subsequent writing use. Dixon Ticonderoga used to be my most prized writing pencil, but now are relegated to junk in my house. With respect, I disagree with you, and claim that there is no superlative example of ANY product manufactured in modern China. But, I suppose contemporary business practice and quality of production are separate issues and not on the mind of any modern businessman simultaneously.

I hope your travels are going well! This is really interesting. The only Dixon product I really use with some regularity is the black Ticonderoga. I haven't noticed a major quality shift, but I did like the matte black barrel, similar to the new Palomino Blackwing, that we saw when it was produced stateside.

In any case, it sounds like a fun trip! Keep us updated!

Back when I was still in school I bought a package of Dixon Ticonderogas at Cost Co. I bought them back when the Ticonderoga was still made in America. The package was a bundled of six boxes which came to 72 pencils in all.

Luckily I still have a lot left. I'm pretty picky about my stationary, I'll only buy from companies that produce their products in America, England, Germany, or Japan. I do make a few exceptions e.g.(Eastern Europe); but I'll never by from any company that produces their pencils in Mexico or China. So once my current Ticonderogas run out I won't buy Ticonderogas ever again.

There is still one good pencil that's made in America. They're made by General's and they're called Semi-Hex in my opinion they're a lot better than the Ticonderoga. Unfortunately they're hard to find, but you can still get them if you order them from their website.

Anon #1 - Thanks for your comments. I certainly empathize with your unfortunate experience with Dixon's pencils since cessation of thier US based production. I would like to point out that in general most Dixon Ticonderoga pencils sold in the US today are not made in this China facility, but rather in the Mexico City manufacturing facility. The vast majority of the Beijing production serves the European market and to some extent the Canadian market.

I was not singling out this facility as a "superlative example" of pencil manufacturing in general. Nor was I specifically addressing the issue of quality in this post, but rather the general development of the facility, the employees and the company over time. Any startup manufacturing operation, regardless of location, faces tremendous challenges to become a commercially successful operation making a broad range of good quality products. These diverse and often complex issues take time as the business and team go through the learning curve common to all startups. I was merely commenting on the favorable progress the company is making overall.

This is not to discount the importance of proper quality assurance in any manufacturing environment. And I strongly disagree with your statement that "contemporary business practice and quality of production are separate issues...". In my personal view the country of manufacture is generally irrelevant to the ultimate quality of a product that can be achieved. Yes, some countries may pose greater challenges in this arena, but that in itself does not preclude high quality production.

The core determinants of success include strong product design, appropriate quality raw material inputs, the implementation of superior management & quality processes, the proper training and technical development of the workforce and management and most importantly developing a workplace culture with a strong sense of pride in quality of workmanship and positive self-motivated workers. These all take substantial work and dedication from management, ownership and workers, but certainly are traits that ultimately can be implemented in China, India, Thailand, etc. as well as in the US, Japan or Germany.

It is always nice to see the next generation getting involved in the business. It sounded like a fun, and educational trip.