Another First Flight, but not a Blackwing. 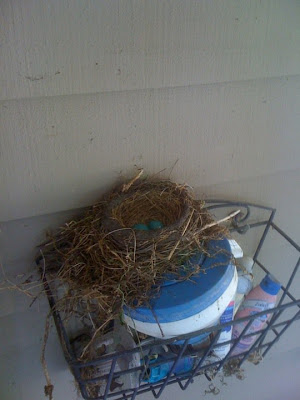 About 4 weeks back a pair of Robins chose to build their nest on a somewhat precarious perch of our floating pool chlorinator that was sitting in a basket just out side our kitchen window. This was about eye level right on our back deck under protection of our covered porch. On May 27th we discovered the nest with two eggs as shown here. 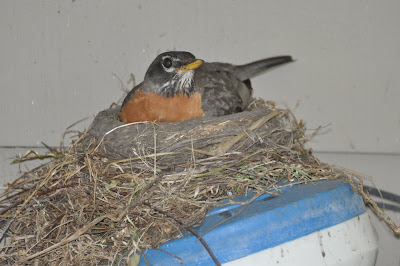 I took the next photo on June 6th as mom incubated her eggs. We had some really cold and rainy days from end of May through the first weekend in June so I think Mom was happy to have the cover of our back porch, though my wife began worrying about the dinner party we were hosting on June 13th for the CalCedar Board of Directors as we planned to dine on the deck that evening. Even after hatching mom sat on the nest early on during the evenings to keep the chicks warm. 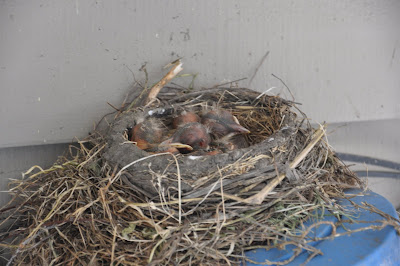 All along we thought we had just two eggs, but in the end we found there were four chicks that hatched. This photo was taken on June 6th which was the first day we noticed the chicks had hatched. 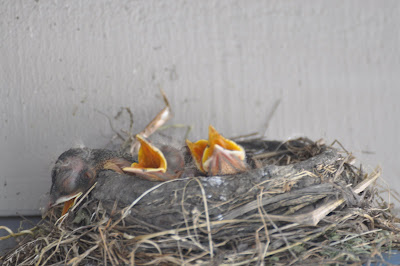 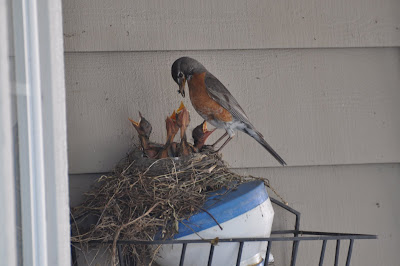 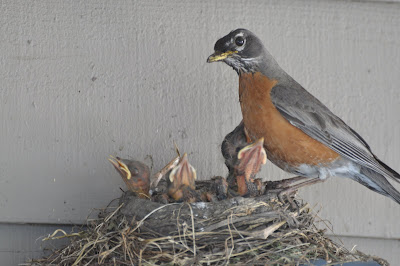 On June 10th, I was able to get several nice shots of feeding activity. It was only at this point we actually realized that both parents were tending the nest and feeding both birds. With return trips to the nest every few minutes from each parent to feed a diet of works and bugs. It also became clear the chicks were not likely to fledge prior to our dinner party on the 13th. We devised a plan to shield the nest from the party by hanging an old curtain in front of the nest. The parents needed to adjust thier landing approach to come in from the side and that took a few tries, but worked. The party came off without a hitch and the parents even kept feeding the chicks with our dinner guests seated just 5-10 feet away on the other side of the drape. After the dinner we removed the drape to improve access and so it would not hinder the chicks when they fledged. 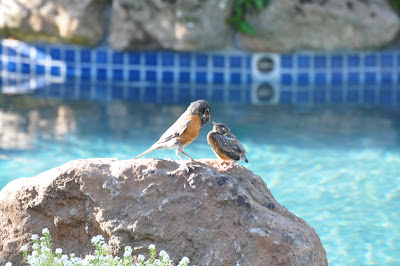 Yesterday morning before work on June 16th I noticed the nest was now empty and chicks all gone. There was quite a mess below the nest on our deck at this point and a trail leading off our deck to the back yard. A few minutes later I noticed one of the parents on our lawn still with a fresh batch of worms and with it was one of the chicks. I was able to snap a few nice shots of parent and chick perched on this rock beside our pool. While taking these last two shots I noticed something in the pool and when I approached I found that one of the chicks had fallen in and drowned. 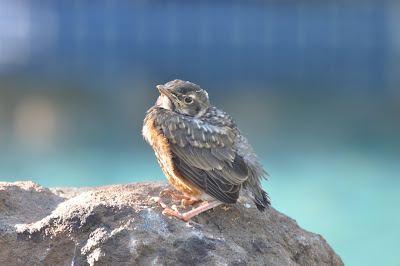 When I went to grab the pool skim net to remove the dead chick my Labrador retriever, Sky, approached the chick standing on the boulder which became frightened and fell into the pool itself. Fortunately, I was able to scoop up the chick as it struggled in the water and save it. It ran off under a Blue Spruce tree next too the pool. Sky had been pretty good during this whole period and had been buzzed a few times by the parents, but never really showed any interest in the birds or the nest until she saw this chick. I only hope she was not the cause of the earlier drowning when she had been out earlier in the morning. Later I saw the chick running through the lawn with one of the parents. I was leaving town yesterday morning and my son arrived to house/dog sit. I never saw either of the other two chicks and my son reports today he has not seen the parents or chicks again either. I am hopeful all three of the other chicks have made it.
Posted by WoodChuck at 7:59 PM