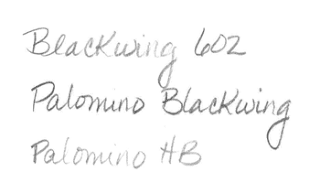 Overall, in our Palomino Blackwing bench test graphite smoothness and graphite wear came out as the first and third most important features of the six specific product features our survey groups were asked to prioritize. The second most important item was considered to be the overall performance of the pencil as a whole. We did not list graphite hardness or darkness as performance features to be rated since these are generally related to wear rate. We did get specific qualitative comments and feedback related to hardness and darkness which we have evaluated as part of this assessment.
Realistically, as much as we all like seeing those images of writing, sketching, and shading and cross hatch gradations, etc. on all these blogs reviews these only serve a limited visual purpose. They do not technically demonstrate smoothness of the core as much as variations in darkness and overall density of graphite mark. They are simply a record providing evidence of a process of personal evaluation.

Perhaps if enlarged enough one might notice respective comparable differences and gradations of fineness in the consistency of graphite material being deposited throughout a stroke across the paper. As my high resolution digital SLR camera was stolen recently and my replacement not yet arrived we’re just using some simple images in this post, others have already well documented their own experimentations. As I’ll discuss a bit further in a few days when we cover the topic of “Half the Pressure, Twice the Speed” we are not aware of any objective, scientific test equipment used in the industry today for measuring “smoothness” of graphite writing cores. So when it comes to smoothness we must rely on the more subjective experience of our test group, our own personal comparisons and the experience of our supplier.

Our control group of experienced Blackwing 602 and other pencil users provided a broad range of feedback on this topic as would be expected. Every individual experiences the tactile and sensory act of writing and drawing with a pencil through their own unique perspective; writing pressure, hand and point positioning vary and is not always consistent even by the same person or differing uses such as drawing and sketching vs. writing. Comments posted on Lexikaliker even mention differences in point angles used for writing in different languages or alphabets . Additionally, variations in the graphite cores of original 602s from different production periods mean some respondents had different reference points for the original Blackwing’s performance. Older Blackwing production dating back to the 1930s exhibit softer-darker cores and more recent stock produced up through and into the 1990s are generally harder with a lighter mark. Unsurprisingly, the range of test group scores on graphite smoothness had the highest deviation of any feature rated. This clearly reflects the higher level of subjective feel and preference to this topic from user to user. 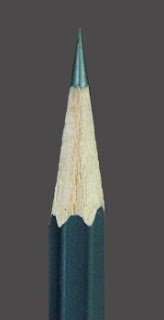 Overall response from both traditional fans and others in our testing groups has been that the new Palomino Blackwing core is as smooth, or smoother than the original and a bit darker. Although some few do feel it’s not as smooth as the original referencing a slight tendency to a crumbly or chalky, carbon pencil like feel. Most everyone felt the wear rate of the new Palomino Blackwing was faster than the original requiring more frequent sharpening making it perhaps less appropriate for writing vs. sketching, drawing, doing puzzles, music scoring or simple note taking. Some also mentioned higher smudginess of our new product as a concern. A few respondents suggested that our HB was a closer match to the original on the hardness-wear rate dimension of performance. Personally when I do extensive writing and note taking in graphite pencil I prefer our Palomino H grade, even to our HB for that specific purpose. Note that Japanese produced cores by comparison have always been softer throughout the HB scale rating vs. European or US production as the Japanese just prefer a softer core overall.

Here is a representative cross section of the qualitative responses from our survey responses good and bad alike. As you can see this reflects a range of impressions we have experienced.

“The core is only very subtly different – with the original Blackwing feeling just a touch smoother and just a little less smudgy.”

“It actually improves on the lead, which I would not have thought possible.”

“The lead is of exquisite smoothness, surpassing that of the original Blackwing. It is quite simply the best lead I have ever tried.”

“I pulled out all my favorite pencils (including the 602) and as it is now, The Palomino Blackwing is one of them. Maybe number 2… I would sacrifice a touch of smoothness for a little better graphite wear.”

“This core is really amazing. It’s as dark and smooth as a gel pen!”

"The point is not as break resistant, crumbles more and wears down much faster, making the pencil less usable for prolonged writing"

“Writing with the new Blackwing is a pleasure. The lead is soft and smooth and doesn’t smear, though now and then a tiny crumb breaks off. The new Blackwing's point wears more quickly than that of the old Blackwing, and the new pencil's line is noticeably darker.” 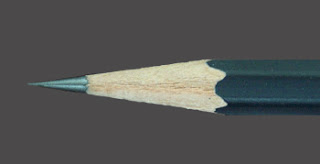 We also received some questions regarding whether or not we acquired the original formulation and if not why not produce an exact match for the original graphite core down to every last performance detail. Let me state that we have not purchased any technical knowhow associated with the original product specifically including the formulation for the graphite core. The Blackwing has not been produced now in about 12 years. The Lewisburg factory which last produced these cores and finished Blackwing 602 pencils was closed a year ago and production relocated to Newell’s Mexicali facilities. Additionally, our experience is that there has been a high level of turnover in company management and technical personnel over the past 15 years as new acquisitions were integrated, product lines and manufacturing rationalized, successive cost reduction programs implemented, etc. Quite often the most knowledgeable person with respect to production of items such as graphite cores is the actual worker on the production floor. Here formulations may be adjusted based on variations in inbound raw material quality and specific equipment used according to specific knowledge of those floor workers to maintain product within a specified quality range. Given the changes in that company over more than a decade it’s not clear such knowledge and equipment setup at Newell currently exists to perfectly duplicate the original Blackwing lead. Perhaps there may indeed even be a file cabinet somewhere with the specific product formulation; even so it’s unlikely we could have purchased this.

So why didn’t we exactly duplicate the formula through reverse engineering with our very experienced supplier in Japan? This is a reasonable question. However, not a simple and inexpensive process, particularly for a product that was traditionally a low volume niche item. The last producer ceased production partially because a machine simply broke. Returning an investment on a niche item becomes an increasing challenge as total development costs increase. While designing our new product, in choosing between “smoothness” comparability vs. “darkness and wear”, I have always believed that smoothness matters the most in matching the Blackwing. Also, as the Blackwing was a traditional favorite of animators and illustrators - where a nice smooth and dark mark is important to these users - I felt best to err on the side of smoothness and softness of feel over an exact hardness & wear match. So in the end we’ve chosen a close match to the original given the higher weighting we put on “smoothness” and also considered where this particular core would fit in relation to our existing Palomino graphite grades. Our overall consumer feedback supports that we have a high performing product reminiscent of the extremely smooth writing performance of both the original Blackwing 602 and comparable to our Palomino quality range.

In conclusion, there seems to be some general feeling that if we can improve on the wear rate while maintaining the current smoothness that would result in an ideal lead, though clearly we have received high praise for the product as it now is as well. It’s not clear to me if the mark on paper being darker for some people is a specific criticism or simply a byproduct of a slightly softer lead. Despite the technical and cost challenges I’ve just noted, we’ve already taken some initial steps to investigate possible modifications to address hardness and wear without compromising smoothness to see if we can get to a more exact match to the Original. Indeed, we’ve begun preliminary testing with our supplier on another formulation that could be promissing. We have not received pricing information and no decisions or very thorough technical evaluations have been completed at this point in time. We will have to keep you all posted on this matter as this develops.

I love the detail in which you report on this new product! I can completely understand why you wouldn't try to reverse engineer the Blackwing 602's graphite — that is an expensive proposition. Faber Castell's lead was really smooth, though — almost like it was waxy. However, it never looked waxy. Some criticisms I've heard of the old Blackwing was that it was TOO waxy, and often the writer sacrificed control over the movement. If your new Blackwing is less so, it might even be an improvement.

As someone who did not receive a Palomino Blackwing sample (sniff sniff), I can't comment on how the new one writes, but judging by some of the reviews I read, I don't think you'll hear too much of a protest.

This is absolutely off-topic, but have you considered mentioning your own preference for the H grade Palomino on the Pencils.Com website, etc.? I'd honestly not give much though to anything softer than an HB almost on some unspoken (and foolish) principle. It might be interesting to have something like, "Preferred grade of the preferred pencil of Woodchuck!" I'm totally serious, too.
:-)

I think the gel pen comment was mine (?). I wasn't bothered by the more frequent sharpening, but I tend to enjoy sharpening my pencils more than most people do, I'd bet. The darkness and smoothness make it worth it, at any rate, to me. But I also took notes with an 8B F-C 9000 the other day for fun.

If I'm being quoted, even w/o attribution, here's what I wrote in my review:

Not: "It’s point wears more quickly than the old Blackwing."

But: "The new Blackwing's point wears more quickly than that of the old Blackwing, and the new pencil’s line is noticeably darker."

The comparison is point to point, not point to pencil. And please, don't make me write it's for its. :) As the writer Jessica Mitford once put it,

Michael -
Thanks for the correction. It's not like me to do that to a quote. I must have been fading fast when I was working on this post last night. I have re-reviewed all the other quotes as a double check and subsequently corrected two other errors - one typo and another punctuation discrepancy.

It would be great if there was a harder version of the Blackwing available, for those of us who use it for writing, not drawing. (Is the Microtomic name still available?)