Reviving the Blackwing: A Labor of Love or Insanity? 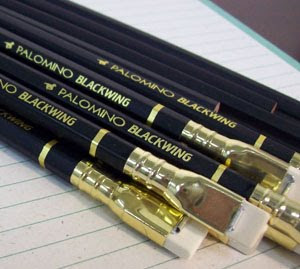 Over the past two weeks we on the CalCedar & Pencils.com team have been in the midst of a grand experiment. That is soliciting and evaluating the initial consumer responses to our new Palomino Blackwing pencil. This process has generated broad interest and feedback from those who participated as well as others who’ve only seen pictures and read the initial blog reviews of a few in our sampling group. Today I am initiating a series of posts over the next couple weeks about our effort to “Revive the Blackwing”. Given there is a tremendous level of detail involved in a project like this, it’s simply impossible to cover in just one or two posts and do proper justice to the subject. Today I start with a general introduction to our consumer evaluation process and provide a list of the intended posts that will lead up to definitive announcements regarding the sales launch for the Blackwing Palomino and future modifications and improvements we plan to make based on continuing feedback.

Our process involved selection of a couple of control groups to gain feedback on our new product. The first group included known Blackwing fans who have had first-hand experience with the original Blackwing 602, which was first produced and introduced by Eberhardt Faber and eventually discontinued in 1998 by the brand's successor owner, the division of Newell Rubbermaid. The second group consists of those less familiar with the Blackwing including those who are active pencil users and fans as well as those who may not consider themselves particularly knowledgeable about pencils at all and had never heard of the famous Blackwing 602.

Those who participated were asked to complete a questionnaire that we provided comparing the two products along with our Palomino HB on a variety of performance factors. Respondents were also asked to give feedback on other aspects such as relative price and new packaging design concepts for the Palomino line. I want to thank all of those who participated directly in this process. Your extensive and detailed responses are greatly appreciated and under review. I’ll cover this all in detail in my later posts.

Some also chose to blog about their review of the new Palomino Blackwing. This opened up tremendous commenting and speculation from traditional Blackwing fans, and many others with various perspectives and their own favorite pencil brand. There was a lively debate of mechanical pencils vs. leadholders, as well as those who expressed the view that this whole community of pencil fans is simply crazy. We thank all those who have and continue to participate in this interesting conversation. Here are some of the main links, sorry if I missed some:

Links to some blog reviews of our Palomino Blackwing prototype

I’ve now probably reviewed several hundred comments. At times I thought to myself “no wonder Apple keeps such secrecy before they introduce new products like the iPhone 4. I must be insane! Why didn’t we just introduce the new Blackwing first?” There has been a lot of greatly appreciated support for our effort, but also some detractors too. One commenter even questioned our motivations stating “don’t toy with us Blackwing fans” in response to one reviewers personal assessment that they felt our new product failed to precisely duplicate the original’s writing performance while our existing Palomino HB was closer. I resisted temptation and kept myself from responding to speculative comments or inaccurate assumptions. I had committed myself to an open process and felt it was important not to unduly influence the feedback until our control group had responded. This should lead to the best overall understanding of those who seem to have a passion for pencils and the original Blackwing in particular. It certainly has been fascinating.

Learning from this process is ongoing. In this series of posts I’ll be sharing my observations, conclusions to date and making some clarifications related to our efforts to revive the Blackwing brand. Here are the planned post topics.

We’ll be opening up these posts on the Pencils.com's What's New blog to commenting as well as on our Facebook fan page and my Timberlines blog here. We look forward to your continued participation and feedback in this process. Hopefully by the end of this series you can all help me determine if this endeavor is a labor of love or insanity. Or perhaps it’s a bit of both.

All of the things I have been very interested to know. I'm eager to hear all about it, and if you would, perhaps mention any unforeseen stumbling blocks along the way.

I know to many, this all seems like misplaced obsession (i.e. "it's just a pencil), but I think this entire journey/process is worthy of attention and documentation...be it a book or some kind of documentary. Can you not see PBS airing a well-crafted documentary focused on this effort, alongside the history of the pencil -- a utensil that becomes more and more marginalized? Not to mention your personal and professional legacy vis-à-vis the craft.

It seems to me that this very effort and enterprise is not only interesting on its own merit, but could be a vehicle to re-introduce, what others have righty called, a "Pencil Revolution."

Sean -
Thanks for your supportive comments. I know some of these posts and my writing style can be a bit "academic", but it appears there is some interest as I do get a number of people requesting more posts on the industry. One of my sons is currently studing New Product Development at his college and I've tried to write this somewhat from the perspective of what a student might learn from this process.

I hope you'll be pleased as this series unfolds. If we should only be so lucky to receive the type of notice you are suggesting. Though we will also be doing some flip video posts on our new Pencils.com You Tube channel to support this series. Our own documentary of sorts.
Chuck

Given the kind of press the old Blackwing has gotten and given the popularity of various forms of nostalgic revival in recent years, I do think that later in the development pipeline there may be some opportunities to draw a wider public's eye. I mentioned elsewhere that there are certainly going to be channels available in the coming months to counter some of the heavy attention on gadgets, and touchscreen tablet computing in particular. I'm not a journalist or anyone of significance, but it's definitely something worthy of consideration.

I personally eagerly await more information on the Blackwing project, and I'm thrilled that you guys are making an effort to open up some of the development process to outside input, rather than keeping it all under a tight lid. Though in my experience as a designer, crowd-sourcing as often as not yields disasters, I think that having a somewhat open development process allows quite a bit of refinement and fine-tuning of design that in-house creatives typically cannot or simply do not attain by themselves. As you suggested though, weeding through the commentary to find not just constructive input, but to find informed constructive input of reasonable quality can be a pain (without Facebook, I had to watch on in silent horror at some of the slogan suggestions presented, though one or two were good enough to come from a competent copy writer). I don't envy the person who bears the burden of such sifting.

Hope to see more posts soon, and thanks again!

Quite an interesting read of the development process of such a promising pencil revival. Looking forward the planned follow up topics particularly the graphite performance and eraser function ones. The academic tone makes them more engaging.

We have to get the Pencil Revolution mini-review up ASAP. I only did the initial impressions , before I wrote much with it. The graphite is just plain exquisite.

I, too, am enjoying the academic slant, being from an academic background myself. Documentation is important. And, when pencil companies are moving overseas (etc.), dumping pencil models and ruining others (I'm not naming names), it's REVOLUTIONARY to have someone resurrect a beloved pencil, even going so far as to acquire the actual trademark.

My only fear is that the Blackwing might overshadow the original Palomino when the big press/notice hits. That would be a shame, since it's such a danged fine pencil. I wouldn't underestimate the press that the resurrection of the Blackwing might generate. I was always shocked at how much talk there was about a pencil blog in 2005 when I started Pencil Revolution (insert my shameless plug here). One of the reasons I had to put the site on hiatus was that it was eating too much time when I had a dissertation to write. :)

Let's face it: the Blackwing is, literally, legendary. Reading the story of the work (let's also face the LABOR part of this labor of love) is, to me, as interesting as the pencil is itself.