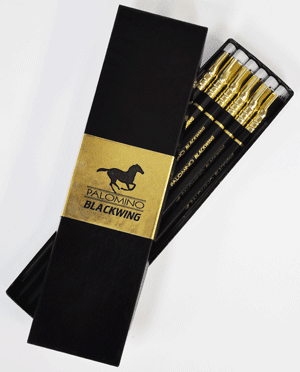 Rather than continuing on schedule with previously planned posts about our design and development process I thought I’d respond to all the inquiries we’re getting about when we’ll actually begin taking orders for the new Palomino Blackwing.

As previously announced, last week we received the expedited air shipment of the first part of our initial production run. Unfortunately final packaging has not yet been completed. Due to customer requests for the new Blacking pencils we have decided to launch without final packaging. Customers who wish to purchase the Palomino Blackwing pencils immediately will receive them in a black gift box (see top photo). We expect to put these up on the site for sale sometime next week pending some other final details we are working through at the moment. We will also offer bulk volumes in our standard one gross quantity boxes (144 pencils). Availability of the Blackwing packaged in our traditional banded dozens format should follow within another two weeks thereafter.

We expect to be able to offer the Palomino Blackwing pencils in the final 12 count package by the end of November once the balance of the initial run pencils arrive from Japan. The image here shows the latest mockup for this box which has taken into account feedback we received from many of our questionnaire respondents to go with more of a typographical treatment in our package design. We think this is tastefully reminiscent of the classic Blackwing package, not a copy by any means, but fresh and updated to complement the style of the new Palomino Blackwing. We are also in the process of designing new retail packs for the balance of the Palomino product range. This should allow us to begin focusing on some retail placement for both the new Blackwing and broader Palomino product range in early 2011.

Additionally we have just worked out details to produce a limited run of high quality wood box desktop sets especially designed to include 24 Blackwing pencils and a Palomino-KUM long point sharpener. These should be available mid to late November. . . just in time for Christmas.

Finally, we are still also working through a few final costing and pricing analysis details so will not provide pricing on these new items until we go live with sales next week.
Posted by WoodChuck at 3:31 PM

Wonderful! I think the black giftbox is very classy and good looking. Perfect for our "limited edition" early purchases. (-:

Thank you for all you do — this is very exciting!

Wow, that giftbox is excellent! My samples are getting very short; can't wait for the production run to come out!

Thanks, Chuck, for all the updates of the process, btw. This is really interesting to read about.

Actually, even just the black box with the gold label for the initial run is beautiful and might be a nice option to keep, say for gift sets.

Alright, great to hear! Can't wait to get my hands on a box...or two...or three.

Finally! I can't wait to get myself some! I hope they don't sell out :D

i have to advocate for purchase limits, or a few rich people will get all the black wings.

this is really exciting!!! i'll be buying some right away!

i've been meaning to write a review about animating with the pencils since i got my prototypes but haven't had time yet, maybe i'll hold off until i can get ahold of some production ones!

were there any changes actually made before they went into production?