Making a Pencil Revolutionary out of an Environmentalist: The Finale 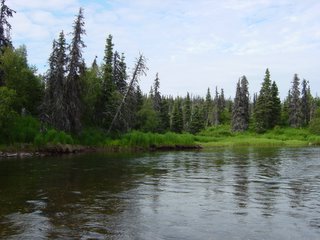 Part 1 of this series set the stage addressing the parameters to be used to address the question “What arguments would one use to convince an environmentalist to use wood cased pencils?”

In Part 2, I provided some detailed information from a former environmental life cycle study conducted in 1993 comparing three forms of casing materials for the typical cased pencil: wood, plastic and a recycled fiber composite material. Certainly, some generalizations had to be made to adapt the information from this study to answer the question at hand in relating the results to alternate writing instruments such as pens and mechanical pencils. I also indicated that relative enviro0nmental impacts may have changed since 1993 due to changes in technology and other factors. I also pointed out the study didn’t look at all issues that might be considered important by enivornmentalus rabidus extremus.

Coincidentally, about the time I was writing my first post on this subject I received a phone call from a true blue environmentalist working actively in the area of forest management issues in our own California Sierra Nevada range. This individual was trained as a Forest Ecologist and is currently working as a consultant to the Sierra Nevada Forest Protection Campaign. This group is a coalition of nearly 100 local, regional and national conservation organizations with the mission to protect and restore the ancient forests, wild lands, wildlife, and watersheds of the Sierra Nevada through scientific and legal advocacy, public education and outreach, and grassroots forest protection efforts.

This group’s historic tactics have been to present legal and public relations challenges to timber sales and Forest Service policy initiatives and timber harvest; clearly a group traditionally at odds with the forest products industry. The interesting purpose of this call was that this person was working on a project for the Campaign to address market opportunities for fire damaged timber on public lands and was interested what opportunities there may be for pencil material. Much of the recent discord has been on treatment of fuel build up in public forests that have had restricted harvests over the past 10-15 years due to changes in public policy and increased challenges to harvesting. Higher fuel loads increase the risks of fire and disease. Interestingly, it now seems that there is some growing recognition among environmental groups that wholesale restrictions of harvesting accomplished historical tactics don’t necessarily lead to healthier forests overall.

Learning that our Forest Ecologist was in fact a fan of wood cased pencils I took the opportunity to ask this Forest Ecologist’s assistance on how to convince environmentalists to use wood cased pencils over other writing instruments. His first comment was that he would personally favor wood as a renewable resource over writing instruments produced from plastic and metal. He pointed out that generally the environmentalist movement however values “critters” first, water quality, second and trees themselves a distant third. When I asked about examples of well managed forests in California he indicated he has personally visited a number of private forests that demonstrate superior natural habitat from a wildlife and water resource perspective than most public lands. He also mentioned that while he would consider himself originally more of what I refer to as the rabidus extremus environmentalist, that with his experience closely involved in these issues he has moved him more towards the middle. Generally, those private forests he mentioned were FSC certified forests. Thus from his personal perspective he would favor FSC pencils such as our ForestChoice pencils on purely environmental considerations with non-FSC Incense-cedar pencils being second. Although he agreed other performance factors for pencils are certainly important considerations when deciding among a wide choice.

Perhaps, the most wary environmentalists out there may be skeptical and disbelieving of these arguments in favor of the pencil as a sound environmental writing choice. To this all I can say is to try riding that Palomino, feeding the Golden Bear or select the ForestChoice if you feel you must nurture the conscience by choosing solely on the basis of FSC wood. If these or other fine writers out there don’t convince you about the benefits of a good high quality pencil, then unfortunately I’ll have to admit failure at this task.
Posted by WoodChuck at 5:29 PM 1 comment:

New Tack for Those Palominos 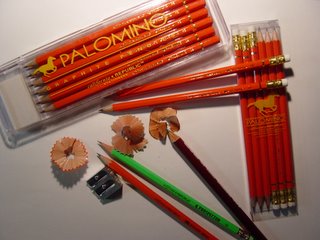 First, our new Eraser Tipped Palomino HB is available initially as a 6 pack similar to our other Palomino items. Next, our new Palomino Deluxe Mixed Grade 12 Pack doubles up on the pencil count in our normal 6 count Mixed grade pack plus adds two new features: a hand held art eraser and our Deluxe hinged plastic case which provides a sturdy permanent stable for those Palominos and new accessories such as a sharpener and eraser. Quantities of both items are somewhat limited in these first offerings on eBay, but we have more replenishment stock on the way which is scheduled for arrival here in the US during March.

We also now have our first KUM sharpener offering at Pencil World, the KUM Metal Wedge Magnesium 2 hole sharpener. This simple classic wedge sharpener offering from KUM provides the option to sharpen both standard and jumbo sized pencils whether round, hexagonal or triangular in shape. This item comes courtesy of a barter arrangement on some GoldenBear pencils with our new trade partner PencilThings.com who has taken on the full line of KUM sharpeners and soon will be adding a selected mix of California Republic pencils as well. During the Frankfurt fair I also met with our new friends from KUM and we have a few additional special sharpener items we will be adding in the coming month or so including some interesting bundled items. Although our KUM sharpener selection will be much more limited than the full range selection now available at PencilThings.com we do think those sharpeners we will carry should complement our pencil range well.

We're always looking at other Palomino breeding opportunities including more interesting tack items to add to our stable of Palominos and other California Republic offerings. While we we can't offer today the breadth of range in tack items you might find here, we promise if you keep riding those Palominos and sharing your experiences with your friends we'll be listening to your ideas and requests and working away at what we think makes sense for the long term.
Posted by WoodChuck at 9:39 AM 12 comments:

Sawadee: Made in Thailand 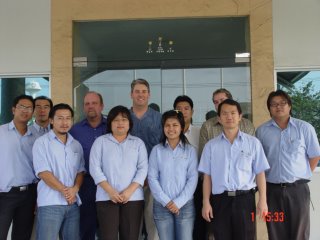 After a busy week in Frankfurt for the annual PaperWorld show last week I just finished a four day visit to our Thailand pencil facility, Propen, Ltd. and am now in Tokyo. More about the fair and my Japan visit in a later post. Quite a change from snow, below freezing temperatures and the hustle and bustle of Frankfurt to the warm climate of coastal Thailand and the wonderfully pleasant and friendly culture typified by the greeting Sawadee.

Our primary business at Propen is to produce OEM pencils for our customers around the world who need either raw, semi-finished or finished imprinted or decorated pencils packed to their specifications. We also produce our Forest Choice, Golden Bear, Prospector and Spangle pencil ranges in this facility. Our Palomino pencils are produced under subcontracting arrangements in Japan to our specifications and then shipped to Propen where we package and consolidate shipments along with our other products produced in Thailand. Finished product shipments go direct from Propen to our customers around the world or can be transferred to one of our warehouse locations to be shipped out in smaller orders to customers in a given market.

This facility is both Chain of Custody Certified to produce FSC certified wood pencils (such as our ForestChoice brand) and ISO 9000 Certified for quality processes. It's loca 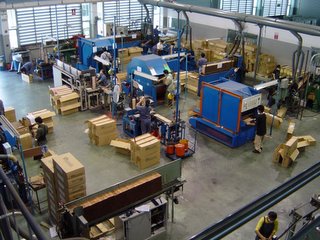 ted in a special econmic development zone run by the Thai Board of Investment and is located at the port of Laem Chabang in the Gulf of Thailand. This about a two hour drive from Bangkok when traffic is good and about 20 minutes from the resort town of Pattaya. The advantage of the BOI location is that pencil slats from our Tianjin, China facility and other components from overseas can be shipped by port processed into pencils and reexported free of duty.

A typical trip for me here includes time on the factory floor, a review of operating and financial performance with the GM, discussion and analysis on details of upcomming orders and business opportunities we are pursuing to assure we have clear action plans and time with the department heads to keep them up to date on developments in the busines and address any communications issues requiring focus to assure we continually improve customer service and response times as our business grows and the complexity of operations and scheduling issues increases. We have a good young team here, growing in capability and experience and it's a pleasure and honor to see their dedication and commitment.

Finally, this trip we also completed a detailed product line review of our California Republic range to address issues of new product additions, discontinuations, product specifications and quality standards, packaging design changes and other enhancements as we look forward to increased focus on generating some initial retail distribution. We performed a short run to add eraser tips to some Palomino Orange HB and will be offering these next week at our Pencil World eBay store along with an exciting new packaging format for a 12 count Mixed Grade Graphite pack which will include a hand held eraser and a KUM sharpener in a nice Palomino plastic hinged container you will love to have to keep those ponies safe and secure on your workspace.
Posted by WoodChuck at 7:30 AM 1 comment: