These Collectors Can't See the Art for the Trees 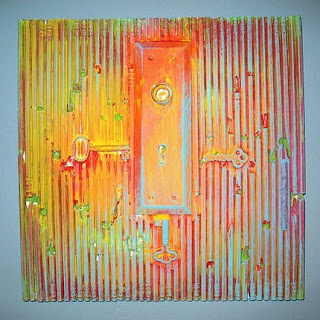 I've always had an interest in understanding how different economic, business and social principles apply to different industries and markets, particularly with respect to historical development of markets over time. Lately I've been reading more about the economics of the Art market leading me to an article by Paco Barragan at ARTPULSE Magazine titled "The New Spirit of Collecting: From Macenas to Prescriptor to Speculator". The article focuses on the historic transition of collecting art from a system of patronage and philanthropic support of the arts through to those who Paco describes as while still maintaining some sense of "the rank of trophy predators" now have set a new trend as "aggressive and benefit-seeking sharks" who's only motivation is to drive up the value of their holdings whatever level of undue influence and market manipulation is required.

He goes on to state that this trend is now pushing it's way into the European collector's psyche:

"Furthermore, the traditional European collector, with an extensive knowledge of art history and a profound respect for artists and art professionals, has given way to a new breed of collector inspired by the "American Model," based upon aggressive price negotiation, quick access to board of trustees of museums n order to conveniently push his artists, and in the end, the attainment of significant economic results for his investment in art."

Barragan appears to be describing a bunch of Wall Street speculators gone wild referring to a the neo-capitalism model of art collecting. Next he'll be calling for government intervention and regulation of the Art Market and as much as implies he would be a supporter of such a concept:

"Obviously there's a "new spirit of collecting," which has come along with the "new spirit of capitalism" ... that, I am afraid, not even Obama will be able to regulate."

As with any free market the excess of a few collectors who perhaps cannot see the Art for the Trees will always push the envelop. In my view the mainstream art collector still acquires based upon personal sense of appreciation for the art and artist on their own merit, not based on some fanatical obsession with profit making. Let's not overreact to the actions of a few and in my view if Barragan thinks the art world has not seen likes of obsessive promoters with good connections to ultimate benefactors and collectors for hundreds of years then he's generally naive.

One of the blessings of all the new social media is it's facilitation of sharing and appreciation of art and interactions among artists, fans and collectors alike. It may not be the most profitable means of getting rich as an artist, bit these media are opening up new windows for artists and becoming more of the mainstream (truly neo-capitalist) means for art distribution over time. Perhaps there will be some commoditization effect that impact valuation, but ultimately a greater number of artists will benefit as a whole vs. those playing in the shark tank who rise and fall as most speculative markets do over time. I think we pencil collectors and other art fans on the web need not worry much about these "aggressive benefit seeking sharks" out there.
Posted by WoodChuck at 11:18 AM No comments:

Maintaining Tradition and Values in the Face of Change

In prior posts I’ve focused on many developments affecting the Pencil industry and how companies have reacted in their business operations and strategies to these external influences. I’ve covered trends such as globalization and growth of imports; consolidation within both manufacturing and distribution channels and the resulting rationalization of brand ranges and manufacturing facilities. I’ve also commented on anti-dumping duties and other trade, environmental and product safety issues. Most of these posts have focused on larger industry players and their adaptation and leadership embracing change to remake their companies (i.e. generally the acquirers and market share leaders) with both positive and negative impacts on quality, customer perceptions, market share, and other typical measures of business and industry success.
This time I provide an alternate view, an example of a family owned and operated business in our industry that stands out for its gritty devotion to a set of traditional values, processes and standards. Historically such family owned and operated companies were the norm in our business. While many companies throughout the world pencil industry remain privately held and controlled by their founding families, quite a few have become actively involved in shaping and driving many of these industry trends. This includes our own business California Cedar Products Company which despite our continued devotion to sourcing US grown Incense-cedar as the raw material for our #1 product line, CalCedar® slats, we relocated slat production to our new Tianjin, China facility in 2001 closing our US based slat and sawmill operations soon thereafter.
General Pencil Company, was originally founded by Edward Weissenborn as the Pencil Exchange in Jersey City, NJ in 1889. The company is devoted to providing sustainably produced products under their General’s® brand range for artists of all ages, skills and abilities; amateur and professional alike. While General has added a range of complementary art supplies to build out the product range through the years its stable of wood cased pencils produced from Genuine Incense-cedar remain as a central foundation of the product quality and performance. The company continues to this day as a fully integrated pencil factory in its original Jersey City location producing its own graphite and other special formulation cores in house.

Proudly made in the USA is a vital principle for General’s® brand pencils. General refuses to import cores and leads or increasing proportions of raw, semi-finished or even finished pencils as opposed to all other US based pencil manufacturers who have long since adopted such practices.
While the CalCedar® slats they use are produced by us in our China operation the wood itself is 100% grown in the USA. General is essentially the only remaining US pencil manufacturer exclusively devoted to a Made in USA and predominant USA component supply strategy. Given the recent relocation of Newell Rubbermaid Lewisburg, TN operations to Mexicali, Mexico, (yet another victim to global manufacturing rationalization) General is now one of 3 remaining US based pencil factories producing for the art and writing pencil market which have vertically integrated processes from wood milling department forward to finish product. The others all import some varying degree of pencils and cores as a relevant part of their supply chain strategy.
Another core value at General Pencil Company is the Weissenborn family’s commitment to consistently producing a high quality product from then best quality sustainable materials. General’s® products are well known by both professional and other devoted artists as being produced to exacting standards to provide reliable performance whatever the application. General’s dedication to traditional internal standards of fine craftsmanship and manufacturing processes assures this result time and again. In addition to its exclusive use of Genuine Incense-cedar slats, General also uses recycled packaging materials in the majority of their products. Additionally General is devoted to producing consumer friendly and safe products which are tested and certified under both the PMA Seal and under the Art & Creative Materials Institute (ACMI) Program.
Certainly many industry participants also produce safe, high quality products with an emphasis on sustainability. Many businesses also have multi-generational family ownership. In my view what is of exceptional note is that General Pencil Company, the Weissenborn family and employees of the company truly live up to these values while continuing to exclusively produce in their original Jersey City factory for over 120 years now. General is a company dedicated to supporting the local workforce (many are also multigenerational employees) in a culture indicative of traditional family values that extend also to the customer service experience. General faces the same competitive pressures all of us face in this industry, but they continue to hold firm and thrive as a result. Speaking from personal experience from a multi-generational family business manager who guided our own company through a challenging manufacturing and market rationalization to off-shore production this commitment and dedication deserves great respect.

As two companies and two families, General Pencil and California Cedar and our respective owners have had a long and positive relationship. I am proud to be associated with this relationship and especially pleased to announce the addition of General’s® products to our Pencils.com Store to further build on this partnership. Indeed with this latest collaboration another generation of both families has worked together on a cooperative industry project. These are represented by Kirstin (5th generation descendant of founder Edward Weissenborn) and my son Philip (a 4th Generation Berolzheimer now helping out at California Cedar Products and 7th generation relative to our family involvement in the pencil industry when consideration of Eagle Pencil Company ). These two focused on setting up the products on the Pencils.com store as well as posting product information pages and developing initial promotional materials for the launch. Thanks for their efforts and here’s a toast to a new generation of promise for the supply of high quality sustainable products from tradition driven family owned pencil industry businesses.
Posted by WoodChuck at 10:22 AM 1 comment: