A Visit to the Brubeck Collection: Pencils Only Please 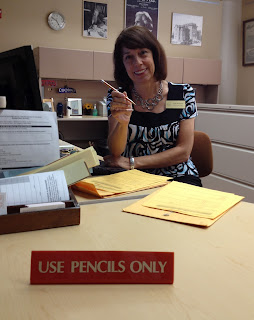 The Summer Jazz Colony occurring this week is one of core programs of the Institute which brings in 18 of the country’s top high school jazz musicians for further training in music theory and performance with dedicated artists in residence and special guest performers and instructors.  Including Blackwing featured artist, Christian Tamburr.  Here’s a quick clip of Christian at his performance last Sunday at the new Take 5 Jazz Club, nearby the University and the Brubeck Institute.  The Wednesday Jam session I attended featured some very talented young musicians playing Brubeck songs and sit ins with instructors as well as special guest, another vibraphonist Stefon Harris

One of the special gems of the Institute is the Brubeck Collection, an archival collection of Dave and his wife Iola’s life’s work in music, international diplomacy and active leadership in the civil rights movement.  Iola, herself a playwright, collaborated with Dave on a number of projects.  About 20 Brubeck Insitute embassadors had the opportunity for a personal tour of the University’s Holt-Atherton Archives which house not only the Brubeck Collection, but also the John Muir Papers collection which holds about 75% of the extant papers of Muir.  Michael Wurtz, University Archivist, informed us of some fascinating facts on Dave and Iola’s lives and careers, and we got to see first-hand a number of these important letters, contracts, albums, marketing materials, music scores and more.

One interesting fact is that Dave really couldn’t read and write music on paper himself much.  His creative, improvisational style just wouldn’t conform well to putting something fixed on paper.  When he did compose some of his more extensive orchestral arrangements his brother or another collaborator usually did most of the music notation.  We were shown one of the first pieces of music he wrote for a school assignment which he subsequently was told what he played was very good, but wasn’t what he had written.  Dave tore up the score and threw it away. A fellow student saved the pieces from the trash taped them together and later sent them to Dave as a memento.  Here's a link to one of Dave's scores a lullaby from 1941, though I could not find a digitized image for the torn score we were shown during the presentation.

Another important thing I learned was about Dave and Iola’scommitment to civil rights.  In fact, 1960 Dave once cancelled 23 of tour dates in a Southeastern states tour when the Universities they were playing refused to allow him to play with his racially integrated band or allow a racially integrated audience.  Here is an intersting letter Dave received on the positive impact resulting from one of the two Universities that did allow this integration to occur.  Also Iola’s and Dave’s musical “The Real Ambassadors”, which celebrates it’s 50th anniversary next month, addressed sensitive social issues as well.