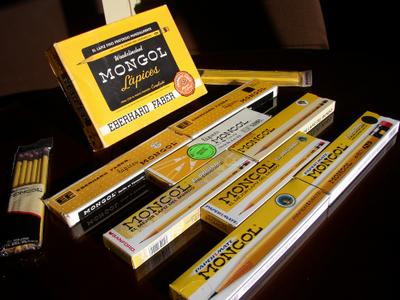 Photo: courtesy of our friends at Sanford Faber Venezuela.

With the buzz of pencil talk going about the blogosphere recently I have seen several comments on the Mongol brand. These reflect preferences for it's functionality and the inability to find this brand here in the US. The Mongol is of course a very famous brand established by Eberhard Faber Company. The Mongol brand is no longer produced for the US market as a result of a series of acquisitions and product rationalizations of the Eberhard Faber USA assets. These assets eventually ended up as part of a 1994 acquisition by Sanford, maker of the Sharpie marker and a division of Newell Rubbermaid.

However, the Mongol continues to be produced today for the Latin America market by Sanford Faber Venezuela, LLC. which is the successor company to Eberhard Faber de Venezuela that Sanford also acquired in 1997. The history of the Eberhard Faber brands and Mongol brands in Venezuela is quite extensive. In this market and elsewhere in South America Eberhard Faber was represented by the Pardo family of Caracas from 1896 until 1960. At that time Eberhard Faber and the Pardos formed a joint venture to begin pencil manufacturing in the local market to replace importing the pencils. This joint venture produced the Mongol brand as well as other products, but was terminated in 1987 when the Pardos acquired the all of the shares and the brand ownership rights for a large portion of South America. The Pardo family continued to operate the business and produce until the 1997 integration into Sanford.

The history of Sanford's entry into the pencil business itself is an interesting study of how the process of acquisition and integration of companies leads to winners and losers in terms of what brands survive. Over an 8 year period starting with Newell's 1992 entry into writing instruments with the Sanford acquisition through their 2000 acquisition of Gillette's Writing Instrument Division (Papermate, Parker & Waterman brands) Newell purchased seven different pencil factories in 4 different countries formerly owned by the following companies:

- 1994 Faber-Castell USA (which had previously purchased Eberhard Faber USA - The EF name replaced Faber-Castell on the American brand and other products as A.W. Faber-Castell the German partner in the US operation retained the world wide writes to the Faber-Castell name following Newell's acquisition)

-c. 1998 - Via it's purchase of Rotring, Newell also acquired the Cosmolab cosmetic pencil operation. This was operated independently of the Sanford business and sold after about 5 years.

This all excludes Newell's acquisitions of other writing instruments companies that did not produce and market pencils. As a result Sanford had numerous pencil & writing instrument manufacturing operations in four countries, a multitude of brands, product space overlaps by different brands and operational redundancies. Their self-penned "Newellization" process of assimilating and integrating companies, products and brands was put to work from the very start. The three US pencil plants excluding Cosmolab were consolidated and numerous brands just outright disappeared from the market.

As a result of "Newellization" here in the US the Eberhard Faber, Berol and Empire names have disappeared from US produced pencils; first replaced by Sanford and more recently by Papermate. The Mongol itself was phased out in favor of the Mirado brand which better fit the Newell/Sanford key distribution channels in the mass market while Mongol had been stronger in the commercial market.

The Berol and Mongol names have survived in various Latin America markets due to the strength of those brands there, though Eberhard Faber name is now gone also from the Venezuelan produced Mongols. Here the Faber name still survives as a part of the Venezuelan subsidiary's corporate identity, but rumor has it that all Sanford's foreign sales and manufacturing operations will soon take on the "Sanford Brands" moniker followed by the country name.

The photo here demonstrates what I call the "Mongolization" of the corporate master brand in the Latin America market. Here the strong Mongol product brand has outlasted the transition from Eberhard Faber to Sanford and now to Papermate. Long live the Mongol. Think globally, act locally.

Note: Doug Martin's Pencil pages have a page dedicated to the provenance of Berol, Eagle and Empire pencil brands up until the point of Empire-Berol's acquisition by the Sanford division of Newell in 1995. A look through this shows many of the brands which have not survived the years long process of acquisition, brand and product line rationalization, including my sentimental favorite Eagle.

It's been correctly pointed out to me that the Mongol brand is also produced under license from Sanford in the Philippines for that Market.

When I was a student at the University of Chicago, the bookstore sold primarily Eberhard Faber Mongols, so a lot of students used them. I still have about 18 or so unsharpened #1s left (and am using a few sharpened). I had no idea they were no longer available.

Hello,
I'm spending some time looking for blogs about earn work from home and came across yours. Posting a comment to say hi and let you know I learned from the comments.
Have a nice day :-),
earn work from home

I'm a new teacher and was rummaging through the old desk in my new room. I found a box of Mongol pencils. I thought they were nice and have not only been enjoying them, but handing them out to students. I came on-line to find some more. I had no idea they were no longer available. Now I'm not feeling so generous.

Just got back from the Philippines and baught a bunch of Mongols. Should also check out the new Mongol Trio. Great looking 12mm clear laquer triangle pencils. They are well finished and good to write with. However, over the years of using the different batches of Mongols, i find that they too have varience in the lead quality. On the same trip, I've also found another brand - Classroom Select TM Wood No. 2. Finishing is not very good, but lead quality is pretty good. Much cheaper than Mongol and I'm not sure where they're from.

Note that Amspec lost it's license to produce Mongol in the Philippines as Newell/Sanford determined to take control of selling thier own brand there. Mongols sold in the Philippenes are now imported from Newells Venezuela factory as far as i understand.

I was just looking up the brand because I use Mongol watercolor pencils that hubby gave to me for our 1st xmas together, so long ago. I wanted to be prepared to get another set when this one is gone, though my pencils still have a long way to go. I love them!

Anyway, thanks for the info!

Hi there.
Id been looking for facts and info about why this pencil is branded Mongol or does it have any reference to that of country Mongolia.
I have a friend who is a Mongolian and we came about a topic about the pencil that is a household name and became synonymous with elementary education here in the Philippines.