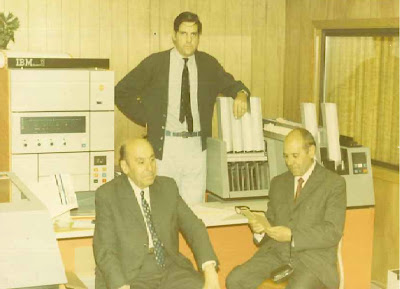 I was cleaning a few things out of my office today and found this picture of my father with who I believe are a couple of slat customers visiting the company, circa 1969. His initial job once he joined CalCedar was as the first Data Processing Manager (for you young'uns that's today's IT Manager or CIO) setting up the first computer system. It was an IBM System 3, with everything controlled by punch cards he'd create to develop reports and store data. I recall ladies in the office entered all the data from slat production and sales on these cards via keyboards and giant stacks of green paper printouts (about 15x20 inches) with perforated edges for tractor feed. I remember using one of these punch card systems in my first computer programming class in high school in the 1970s. The system took up a large percentage of the office space. That same office space, now remodeled is where I have my office today.

The 2nd picture below (also found today) is of dad playing the keyboards he really prefers around the same age. He's probably playing "Night in Tunisia", his favorite song. Just love the pants above and the jacket below. Dad went on over time to become President of both CalCedar and Duraflame and now Chairman of the Board of both companies. His computer keyboarding now is most often to pass along jokes and videos he finds interesting from the internet to friends and relatives, but he's still always sitting down at the piano with the same set list of jazz classics. I can't say his taste in clothing has changed much either. 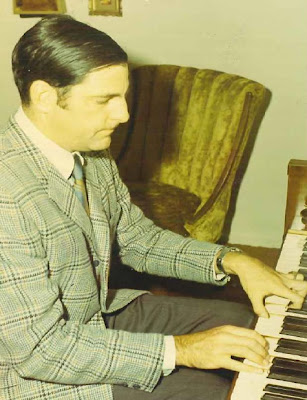 Posted by WoodChuck at 4:29 PM

Oh my!! There is Phil playing some of those 'hip' chords... probably playing Night in Tunisia....great blog and great shots Chuck!